Lightning Ridge, a small outback town in New South Wales, is the only place in Australia, and one of the few places in the world, where the highly prized black opal is found. Opals with a vivid play-of-color and a black or dark body color are classified as black opals.

The beautiful 26.9-carat specimen, above, is an example of a black opal sourced at Lightning Ridge — a mining area that has been yielding top-quality opals since 1903. The ring was gifted to the Smithsonian in 1970 by Mrs. Oliver B. James and became part of the National Gem Collection in Washington, D.C. The cabochon-cut gem displays a variety of intense colors, including red, violet, blue, green, yellow and orange. 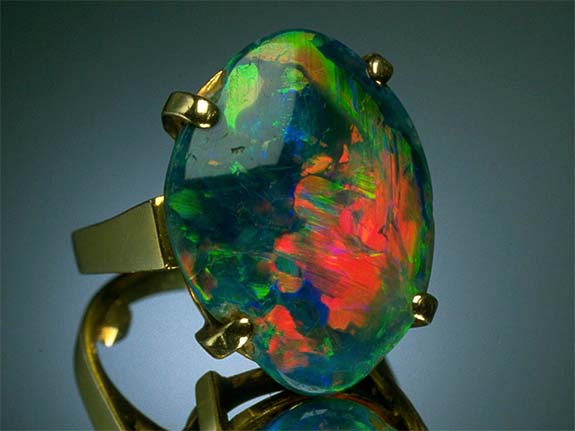 As one of October’s official birthstones, the precious opal is universally loved because it can present all the colors of the rainbow. Each opal is truly unique and more than 95% of the world’s fine opals are sourced in Australia. Other varieties include white opals, boulder opals, crystal opals and fire opals.

As we reported earlier this year, a world-class facility dedicated to Australia’s national gemstone is taking shape at Lightning Ridge. The $24 million Australian Opal Centre will be a world-class tourism attraction and an internationally recognized hub for opal-related knowledge, training and certification.

Scientists believe that between 100 million and 97 million years ago, Australia’s vast inland sea, which was populated by marine dinosaurs, began retreating. As the sea regressed, a rare episode of acidic weather was taking place, exposing pyrite minerals and releasing sulphuric acid. As the surface of the basin dried further and cracked, silica-rich gel became trapped in the veins of the rock. Over time, the silica solidified to form opals.

In precious opal, the silica spheres are uniform in size and are stacked into an orderly arrangement, which gives the structure the ability to break visible white light into separate colors. Interestingly, 95% of the opals found by miners is void of color. These specimens are white, grey or black. The locals call it “potch” and it has very little value. Potch is composed of the exact same mineral as fine opal – spheres of silica dioxide. The only difference is that in potch, the tiny silica spheres are jumbled, whereas in precious opal they’re all laid out evenly.

An opal’s silica structure contains 3% to 20% water, according to the American Gem Society. The value of a fine opal is based on a number of factors, including brightness, color, pattern, body tone and consistency (how it looks from multiple angles).

While Australia remains the primary source of fine opal production, the October birthstone is also mined in Mexico, Brazil, Honduras, Ethiopia, the Czech Republic and parts of the U.S., including Nevada and Idaho.