Marlyn Sanchez is well known at Marlins Park in Miami because she’s frequently called on to sing the national anthem. So, when her boyfriend, Ralph Cabrera, arranged for her to throw out the first pitch before Wednesday’s contest between the Marlins and the Dodgers, Sanchez didn’t have a clue that he had plotted the perfect marriage proposal. 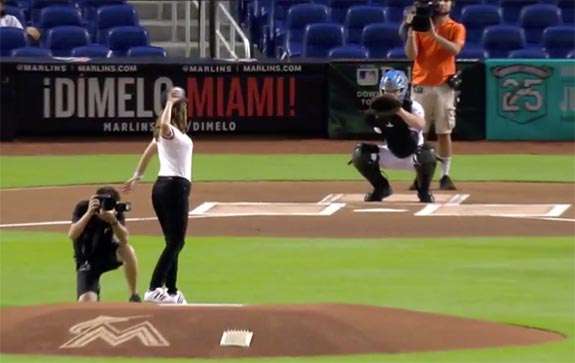 Dressed like a Marlins player and masked in full catcher’s gear, Cabrera crouched behind the plate as his girlfriend stepped on the pitcher’s mound, wound up and spiked the pitch — wide to the left. Her boyfriend scooped up the wild toss and hustled to the mound to give her the ceremonial ball. 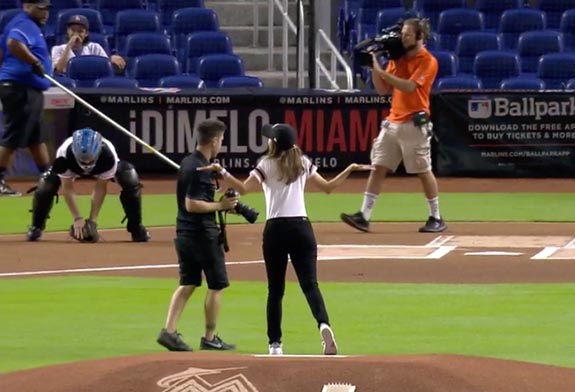 Sanchez’s embarrassment at throwing such an off-target pitch quickly turned to elation when Cabrera unmasked himself, dropped to one knee and opened a custom ring box that happened to be in the shape of a baseball. Slotted in the box was a diamond engagement ring. 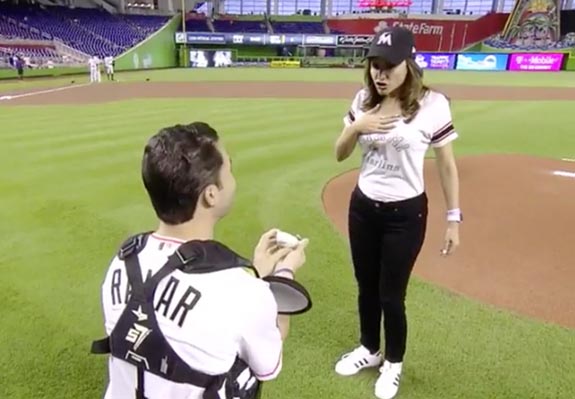 In front of the Marlins’ hometown fans, Cabrera asked Sanchez to marry him and she instantly nodded yes. 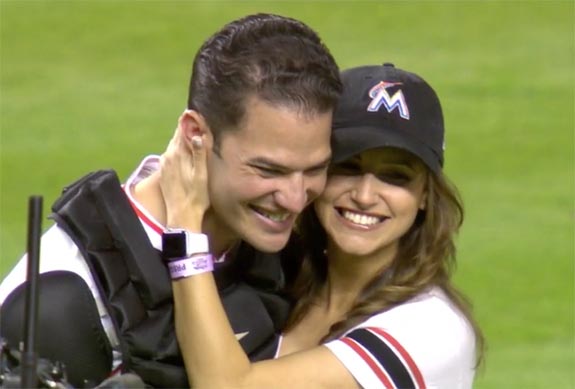 Miami Marlins broadcasters, who were covering the ceremonial first pitch and proposal in real time, suspected that something was awry. Typically, the person receiving the game’s first pitch doesn’t come out in full catcher’s gear.

Also, the masked catcher was wearing a #1 jersey with the name “RAMAR” on the back. Sanchez revealed in a pregame Twitter video that the name represented a combination of the first letters in the names Ralph and Marlyn. The #1 symbolized that the couple would soon be united as one. 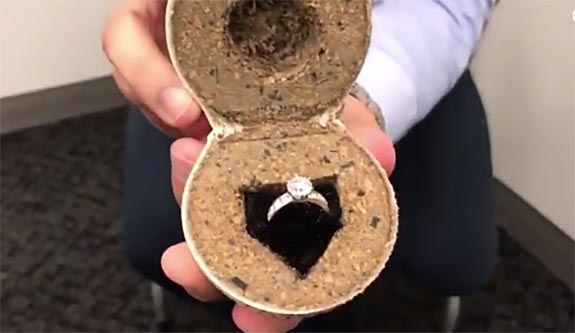 “I found a diamond in the rough,” Cabrera said on the Miami Marlins Twitter page. “And now I’m going to give her a diamond on the diamond.”

During a post-proposal TV interview, the newly engaged Sanchez revealed how she was feeling just before her boyfriend unmasked himself.

“I was so busy concentrating on trying to throw the ball – it was horrible,” she said. “I apologized to him when he came over and he took off his mask.”

Sanchez and Cabrera, both of whom are die-hard Marlins fans, will always remember an unforgettable marriage proposal — and an exciting Marlins victory over the Dodgers, 6-5.

Their story was picked up by Yahoo, USA Today, Sun Sentinel and Inside Edition, among many other outlets.