A California man turned a horrific scene into something beautiful Sunday when he found his wife’s bridal jewelry amidst the charred rubble of their devastated home and proposed to her all over again. 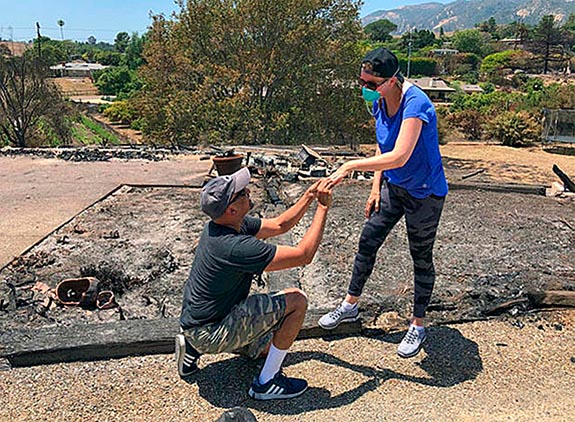 “She’s the most beautiful woman I’ve ever known, she’s the glue in our family, and I adore her to pieces,” Ishu Rao told the Associated Press, “so if I can put a smile on her face I’m going to do it.”

Married only eight months ago, Goleta residents Ishu and Laura Rao had barely any time to escape their home when wildfires swept through their neighborhood last Friday evening.

Laura had taken off her rings and was getting ready for bed when the fire forced them to flee with Ishu’s two daughters, three dogs and a cat.

When the couple returned to check on their home on Sunday, the structure was reduced to a pile of ashes. By looking for the pipes that had remained somewhat identifiable, Ishu was able to home in on where the kitchen sink had been. That clue gave him a starting point in his search for his wife’s bridal jewelry. Before long, he had located her charred engagement ring and wedding band.

In a spontaneous expression of love (and with Santa Barbara County Fire Department official Mike Eliason on hand to capture the moment), Ishu went down on one knee and asked Laura to marry him once more.

“It put everything into perspective,” Laura told the Associated Press. “It took all the pain away and reminded me of what matters in life: the people around you.”

“It was truly a special moment out of the ashes,” added Eliason, who posted photos of the proposal to the Fire Department’s Twitter page.