Mined in Ancient Times on the Island of Topazios, Peridot Was Originally Called ‘Topazion’

Here’s a fun piece of trivia regarding peridot, August’s popular yellowish-green birthstone. According to the Smithsonian, peridot was first discovered on the Egyptian island of Topazios around 300 BC. The ancients anointed the vibrant green stone as the “gem of the sun” and appropriately named it “topazion” to honor its place of origin. Eventually, the name was shortened to “topaz.” 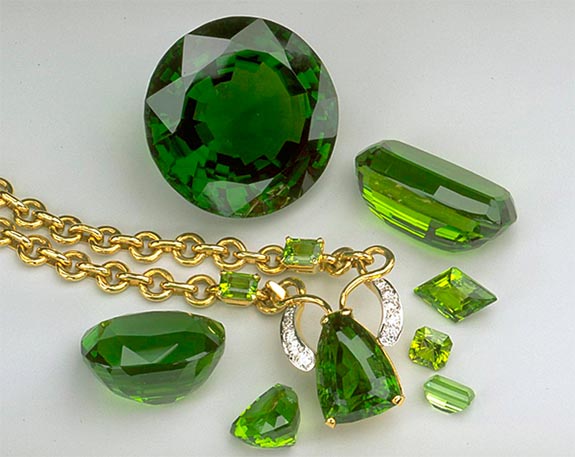 The gem we know as peridot happily existed as “topaz” for about 2,000 years before something bizarre happened…

The Smithsonian noted that, for reasons that still remain unclear, the name topaz was hijacked during the 18th century and assigned to the gem we call topaz today. The vibrant yellowish-green stone was given a new name — peridot, derived from “faridat,” the Arabic word for gem.

To this day, topaz continues to be the oddball namesake of an island that never produced topaz. Geography fans should note that the ancient island of Topazios is now called Zabargad or St. John’s Island.

The non-gem variety of peridot is called olivine, a mineral component of Hawaiian lava and one of the first crystals to form as magma cools. Mahana Beach on Hawaii’s Papakolea coast is one of only three green sand beaches in the world. The sand owes its astounding color to olivine crystals eroded from an ancient volcanic formation and delivered to the shore by ocean waves.

While most peridot originates deep in the Earth’s mantle, scientists have also proven that August’s birthstone is truly extraterrestrial. It has been found embedded within meteorites and scattered across the surface of Mars.

The finest peridot hue is a saturated green to slightly yellowish green — and free from brown tints, according to the Gemological Institute of America.

Peridot can be found on five continents. The gems represented in the photo, above, are from the U.S. (Arizona), Egypt, Myanmar (formerly Burma), Pakistan, Antarctica and Norway. They range in size from 8.9 carats to 311.8 carats and are residents of the Smithsonian’s Janet Annenberg Hooker Hall of Geology, Gems and Minerals in Washington, D.C.